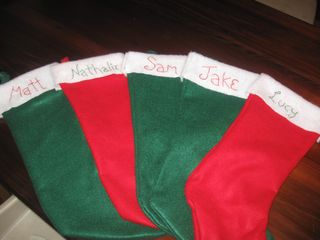 "I'm so crafty, I make people!" That sign cracked me up the other day. In addition to making Baby Jake, I finished making and embroidering our Christmas stockings! Matt is totally right that glitter and glue would've been a better option at this point but whatever … here they are! The only thing I'm planning to do is give my new seam-ripper (courtesy of the Great Loretta) one more work-out by taking out the "M" on Matt's and making a new one.

"Really?" Matt shook his head and pointed at the calendar. Sure. Why focus on the million other things I need to do when I could hyper-focus on the fact that I'll always hate the "M" on his stocking if I don't fix it? He said he'd rather have a "crappy 'M' – and not that I'm saying it's crappy" than have a stocking that says "att" or have me stressed about fixing it. We'll see.

In other news –and this is just hysterical– we are sick, snot everywhere, coughing like crazy sick. Just a reminder to paint an accurate picture – I'm 37 weeks pregnant with a cracked rib. Like I said, hilarious. Also I just found out my in-laws are planning to come visit overnight on Saturday. I did announce that I'm no longer bending over and there's only so much I can do with my grabber. I'm sure they'll be understanding and not at all concerned about the conditions I'm raising their grandson(s) in.

Speaking of questionable parenting … and this is the kind of thing that makes me think a suitable title for my memoir would be Did I say that out loud? … the dryer stopped working the other day. Of course it did. I could make it work with a pair of pliers and a haphazard guess as to what cycle I was using but that would only last so long so Sam and I went to the appliance store yesterday. Sam dropped something and said in a sweet voice, "Oh, shoot!" The saleslady smiled at him and started to say something complimentary but was interrupted by Sam's loud outburst of "Oh, Dammit!"

Those of you trying to weigh the pros and cons of having kids in daycare, well … just think, there's no pretending for me as to where Sam might've picked that up … I'll have to talk with his father.

3 thoughts on “Gettin’ all Crafty and Crazy for Christmas”