Sam had his first day of (play) school yesterday. It was awesome! We were late, but don't tell the punctual Mr. Hardy that please. I was impressed I got us all out the door dressed, fed and relatively clean.

I wasn't sure how Sam would handle the new experience. We've talked school up quite a bit but then yesterday Lucy had a training session with our obedience school instructor and I told Sam she was in school. His eyes got kind of wide because Sandy was standing on the leash near Lucy's neck to encourage her into a settle position. In retrospect I probably should've called it something else. Then again, the kid was amazingly well behaved. He kept saying how much fun he had at school.

We were, of course, the last ones to arrive and Sam stopped in the doorway and watched for a few minutes before deciding it would be worth checking out. They had him at the first table: cars + a huge tub full of the punch-outs from the Casino's card decks = Sam Heaven. 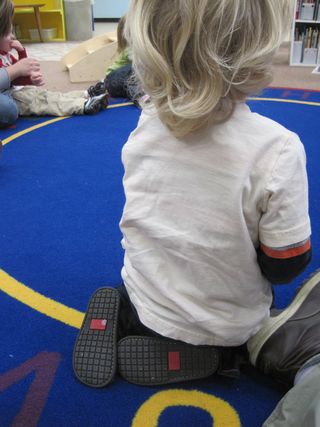 He later discovered where all the other cars were stored and spent the most of the remainder of the time moving the cars across the room by the handful. It was fun to watch him sharing with other kids and then surprise of all surprises sit down for circle time. He sang and listened to part of the story before realizing he could be playing with the cars all by himself. Except he couldn't. So we had a little tantrum and then went back to the circle. Until he decided he could be playing at the craft table taking the lid off all the glue sticks. And then coloring with the glue sticks. "Come on, Mama, let's color." He said as he swiped a line of glue on each block of paper he could reach before I could stop feeding Jake and explain to Sam about how glue isn't a color and we can't use all of the paper. See, teaching opportunities abound.

Honestly, this will be as much a learning experience for me as it is for him as I watch the teacher interact with the children and set up age-appropriate activities and navigate the world of toddler practice sharing – which is to say not sharing most of the time.

As I drove us to school sweating and heart-racing I realized it was likely too ambitious of me to commit to being somewhere on time twice a week but I really wanted something for Sam that was all about him. Since it's a pre-pre school parents have to be there and I'm allowed to bring Jake since he's so new to the planet so I feel like I'm still with him but someone else is in charge of creating the activities and learning opportunities and (my favorite part) the clean up. The joy on his face and watching him wave to one of his new little friends on the way to the car was worth it!