Well, the tape gun I borrowed from Christine a few moves ago started its comeback tour Sunday afternoon. I've been holding off on packing until we knew where exactly we were going but after the last six weeks of speed-dating through Yamhill and Washington County's RLMS listings we have left it up to God. (Funny, huh? The way we pretend that's something we decided rather than the way it is.)

Anyway, we found another house that appears to be The One. Again. But, we'll see.

In keeping with the dating analogy, I'm one of those people who doesn't necessarily believe that there's only one soul mate for each of us. I believe that love is a choice as much as anything else. It's wonderful to feel like the person you've picked as a partner in life is your soul mate, but I think it's possible to experience that more than once in a lifetime.

Which reminds me of one of my favorite lines from Friends where Ross is worrying that there was only one woman for him, and you know … there turned out to be one woman for her so he's left wondering what that means for him … when Joey gives him this pep talk:

"What are you talking about? "One woman." That's like saying there's only one flavor of ice cream for you. Let me tell you something, Ross. There's lots of flavors out there. There's Rocky Road, and Cookie Dough, and Bing! Cherry Vanilla. You could get 'em with Jimmies, or nuts, or whipped cream! This is the best thing that ever happened to you! You got married, you were, like, what, eight? Welcome back to the world! Grab a spoon!"

Maybe it's a stretch but the way I see it, picking the right house for us is like picking the right life partner. Initially there's the element of falling in love, something to do with how the house makes you feel and your first impression of its looks and character.

Did we find that house this weekend? We sure hope so. When I hear back either way today I'll share the backstory with you but for now I'll just say … we're anxiously waiting for her to call back. You know, like dating. 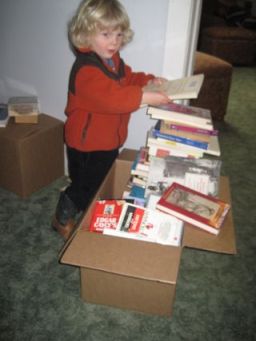 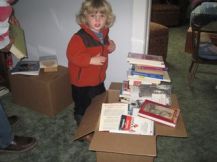 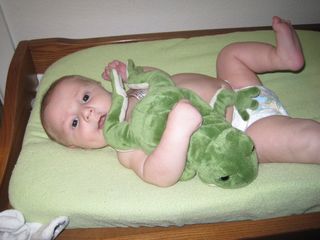 Sam helping us pack. He kept saying, "I make a nice pile for ya!" And then, here's Jake doing his part by staying content wrestling with his zaba.

4 thoughts on “Still life with a packing gun”