We had a little misunderstanding that came to light in the minivan yesterday.

While there were tears shed across the state on back to school day yesterday, my boys cried because they weren’t going to grade school.

When we rolled up to drop the boys off at preschool/daycare, Sam cheerfully told his brother, “Goodbye, Jake. I’m going to Kindergarten now.”

Except no, to both.

Though Sam will start school tomorrow, Jake is a ways out from his first day pics.

But, Sam did get to go meet his teacher at which point I had an opportunity to practice reacting to misunderstandings and confusion of my own.

First, I was flustered at the front office, fumbling to get my license out of my purse while the other parents gathered in the hall listening to the teacher. I misunderstood the sentence “personal time for you and your child to get to know the teacher and classroom” to mean it would be just us.

Instead it was a whole group, which was fine – great, even. It’s just not what I was expecting.

I was impressed by the teacher giving the kids a task to play with a tub of specific toys, and my kid may or may not have helped organize the organizing effort. By color, and by type of material. Love. Him. 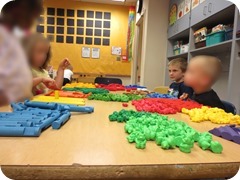 Oh, and can we talk about supply drop off? Because that threw me off too.

I was flustered at the supply drop off because it was more of a random dump with little direction or clarity.

So, let’s talk about those supply lists for a sec.

I was proactive and downloaded one marked for this school year (for sure, I’ve checked a few times).

But, alas after checking that list off, we received a letter in the mail with different and conflicting supplies.

People! I’m trying to be perfect here and that shit messes me up!

Also, how about some labeling instructions. Really, it’s easier to do it at home with a Sharpie than in a crowded classroom while I’m trying to casually stalk my child to see how he’s interacting.

Community supplies? Sweet- just let me know in advance so I’m not letting Sam pick which color scissors he wants when really, it’ll fall into the “get what you get and don’t throw a fit” clause.

But it’s not about the tissues or about doing everything right, right?

It’s about how you react to being thrown off. It’s about learning to find your balance even when the ground below you is unsteady.

So while it’s Sam’s first day of school tomorrow, it’s also my first time with a kid in school – we’ll get it figured out in time for graduation I’m sure.

Oh, and one more thing. When I first heard through a friend that my son’s teacher was going to be a man I was a little tripped out.

Like damn near everything else about parenting it didn’t match the picture in my head for what would happen when Sam started Kindergarten.

“When I was a kid, I was a boy and recess saved my life.”

And that’s when I realized it was all going according to plan, even if it wasn’t the one I came up with.