I am on deadline for my column. Which means I have fifty other things I want to write to you about.

First, a word about process because you (okay some of you) asked: Do you plan your columns out ahead of time?

The answer is: Yes! And then I change the plan up until the very last minute. My editor LOVES this. Actually, she might not have known about that exactly until just now: surprise! But she doesn’t mess with process. She’s about the final product. And that seems to work itself out time after time. You’d think I’d just trust that it will. Instead … angst.

What I’m about to tell you happens every. single. month and yet it annoys and agitates me each time. Hoping to trade those a-words for acceptance but alas … here I am: Column due tomorrow morning and I have three drafts with totally different subject matter merged in my mind and in various stages in my journal and Evernote files.

I keep trying to force them into one, coherent one and it’s not working because it’s not supposed to. Somehow between now and when I file the column, it will be all fleshed out with a beginning, middle and end – and it will make sense outside of my head. I do actually trust this will happen because it has for seven years now.

But still … the construction noises starting outside our windows at 6:30 a.m. means the boys will be up soon, I get to volunteer in Sam’s class today (Yay!) and then you know the care and feeding of our home and its inhabitants … and a few other things I’ll do to avoid making the final decisions of what to write exactly until it’s clearer in my mind. Then … I’ll just do it.

Sorry. I wish my method was more organized, but there it is. So, yes I work on it all month with putting scribbles on notecards in an Evernote collection tagged “Column” but also, new angles and ideas keep coming until just before it’s time to submit it.

So that was way more than “a” word about process, ha!

I love reading about how other people do their work, I know that’s not everyone’s interest so moving on to … planner geekery. Everyone LOVES that stuff right? You would if you had this sweet little planner by Erin Condren:

I’ve been carefully tracking my time since the boys went back to school. More on those findings another day but I was surprised at how much time just … gets spent. Gone. So, I did what any over-achieving, slightly mentally ill person would do and set two crazy-ambitious goals because that’s just how I get stuff done.

For what it’s worth, I did consider deleting the part about “slightly mentally ill” because that could be offensive. And I am not about offending people. But I also am ready to be done worrying about the possibility all. the. time. Plus, I am about owning our stuff. And the truth is, I can show you a doctor’s note that says I’m allowed to say that.  (Hashtag: things you never expected to be all “so there” about. Bet that one doesn’t stick!)

1. Write my ebook guide on how to be a holiday mom (Better title please come to me!!!)

2. Shed 40 pounds by my 40th birthday. (There’s a slightly-less-than-reasonable-but-still-doable amount of time left).

I was surprised though, to see it was October this week. So then I got kind of serious about it and increased my word count per day by a lot of words! And decided to quit sugar. Still feeling kind of stabby so I’m laying pretty low, and mostly staying off The Facebook because its not that I don’t have a comeback dear people of Newberg and Dundee who are so precious about a free community service. But again, off The Book of Face am I. So far, down two pounds. So, maybe there is something to setting a goal and writing it down thing … 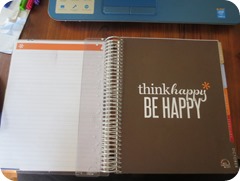 Some of you have asked to peep my planner – totally yes! But right now I’m going to try to tune out the guy with the bullhorn in front of my house and the bulldozer jacking up my driveway and actually write my column. You know, the one due tomorrow. You guys. It feels like my whole house is on the spin cycle. But, yay for new sewer lines, thanks Newberg!

(Affiliate link disclosure: I recommend products and people I use, love and respect. Sometimes I even get a few cents for it, at no cost to you).

Nathalie Hardy recently published her first book, “Raising the Hardy Boys: They Said There Would Be Bon-Bons” available at local bookstores and online. Hardy writes in the margins of her life with two little boys and a husband who understands deadlines come before dusting. To contact her, visit http://www.nathaliesnotes.com. If you add your email below you can get updates in your inbox so you never miss a post. Yay?