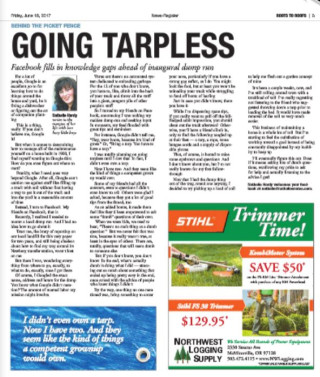 For a lot of people, Google is an excellent go-to for learning how to do things around the house and yard, be it fixing a dishwasher or figuring out the art of companion planting.

This is a thing, really. If you don't believe me, Google it!

But when it comes to figuring how to manage all of the maintenance yourself on a home built in 1900, I find myself wanting to Google this: How do you even figure out where to start?

Frankly, what I need goes way beyond Google. After all, Google can't caution me against stuff like filling up a truck with soil without first having a way to get it out of the truck and into the yard in a reasonable amount of time.

Recently, I realized I needed to mount a local dump run. And I had no idea how to go about it.

Trust me, the irony of reporting on our local landfill for this very paper for two years, and still being clueless about how to find my way around its Newberg transfer station, wasn't lost on me.

But there I was, wondering everything from where to go, exactly, to what to do, exactly, once I got there.

Of course, I Googled the exact name, address and hours for the dump. You know what Google didn't mention? The amount of manual labor my mission might involve.

Turns out there's no automated system dedicated to unloading garbage. For the twelve of you who don't know, you have to, like, climb into the back of your truck and throw all the stuff into a giant, pungent pile of other people's stuff.

So I turned to my friends on Facebook, announcing I was making my maiden dump run and seeking input. In moments, my feed flooded with great tips and reminders.

For instance, Google didn't tell me, "Hey, wear boots because it's kind of gross." Or, "Bring a tarp. You have to have a tarp."

I was totally planning on going tarpless until I saw that. In fact I didn't even own a tarp.

Now I have two. And they seem like the kind of things a competent grown up would own.

Some of my friends had all the answers, even to questions I didn't even know to ask. Others were glad I asked, because they got a lot of good tips from the thread, too.

As an added bonus, it made them feel like they'd been empowered to ask some "dumb" questions of their own.

When we were kids, we used to hear, "There's no such thing as a dumb question."  But we never felt that was true, because it really wasn't true, at least in the eyes of others. There are, totally, questions that will seem dumb to someone else.

But if you don't know, you don't know. In the end, what's actually dumb is doing what I did — stressing out so much about something that ended up being pretty easy in the end, once armed the with the advice of people who kew things I didn't.

By the way, one thing no one mentioned was, bring something to cover your nose, particularly if you have a strong gag reflex, as I do. You might look the fool,  but at least you won't be unloading your truck whild struggling to fend off bouts of barfing.

Just in case you didn't know, there you have it.

While I'm dispensing spare tips, if you really want to pull off the full-fledged adult impression, you should clean out the truck afterward. Otherwise, you'll have a friend climb in, only to find the following tangled up at their feet — a tarp, a rope, some bungee cords and a supply of disposable gloves.

That, of course, is bound to raise some eyebrows and questions. And I don't know about you, but I'm not really known for my fast follow-through.

Now that I had the dump thing out of the way, round one anyway, I decided to try picking up a load of soil to help me flesh out a garden concept of mine.

It's been a couple weeks, now, and I'm still rolling around town with a truckload of soil. I'm really regretting not listening to the friend who suggested throwing a tarp down prior to loading the bed. It would have made removal of the soil so very much easier.

This business of maintaining a home is a whole lot of toil. But I'm starting to feel the satisfaction of working toward a goal instead of being constantly disappointed by my inability to keep up.

I'll eventually figure this out. Even if it means asking lots of dumb questions, swallowing my pride to ask for help and actually listening to the advice I get! 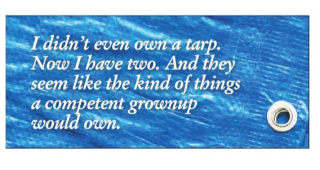 Hardy writes her columns "Raising the Hardy Boys" and "Behind the Picket Fence" in the margins of real life.

If you add your email below you can get updates in your inbox so you never miss a post. Yay?